Mt. Kumotori or Kumotori-yama is located at the western end of Tokyo, on the border between Saitama and Yamanashi prefectures. It is the only one in Tokyo that has been selected as the “One Hundred Mountains of Japan”.

Photo 1: Mt. Kumotori in May seen from the summit of Mt. Nanatsuishi, which is known as the observatory of Mt. Kumotori. On the left side, where you can see the mountain trail is Ishione. (Photo: 2017/5/23)

Photo 2: Mt. Kumotori in December seen from the summit of Mt. Nanatsuishi. Because the air is clear, both the shape of the mountain and Ishione can be seen clearly. (Photo: 2001/12/18)

View of Okutama from the Yamanashi side, and view of Okuchichibu and Mt. Fuji from the Saitama side.

In the past, the main route was from Mt. Mitsumine in Saitama Prefecture to Mt. Kumotori by walking along a long ridge road. However, due to the long approach to the mountain trail and the congestion caused by the tourism of Mitsumine Shrine, many people are now climbing from the Okutama side.

A ridge called Ishione extends from Okutama Station, the end point of the JR Ome Line, to Mt. Kumotori. A beautiful and easy-to-walk mountain trail continues along the ridgeline. However, it is difficult to walk through in a day because the distance is long and there are many ups and downs.

There are many good mountains on the ridge of Ishione. In particular, Mt. Nanatsuishi is known as the observatory of Mt. Kumotori. The title photos of this article are Mt. Kumotori seen from Mt. Nanatsuishi. The mountain trail on the lower left is a part of Ishione, which leads to Mt. Kumotori via Yomogi-no-kashira and Mt. Ko-kumotori.

Click here to an article of Mt. Nanatsuishi and the view from the summit. And beautiful photos of Ishione.

Ishione is an attractive trekking course, but it is easier to climb from the Nippara Limestone Cave, the Kamosawa Bus Stop on the shores of Lake Okutama, or from the Yamanashi Prefecture side via Sanjo-no-Yu to Mt. Kumotori. See the access section at the end of this article for these routes.

By the way, regarding the summit of Mt. Kumotori, if you enter the mountain from the direction of Tokyo or the Yamanashi side, you will reach the peak of the rock next to the evacuation hut. When approaching from Ishione, it looks like the photo below. 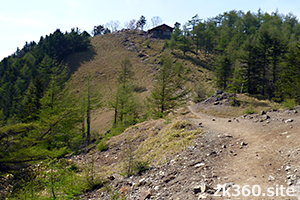 This is the prefectural border between Tokyo, Saitama and Yamanashi. And it looks like a summit. In fact, there is a mountaintop sign by Yamanashi prefecture. First, a panoramic photo of the whole celestial sphere from here. The front is Ishione, and you can see the mountains of Okutama beyond that.

*Click the word THETA at the bottom left of the screen to see a wider screen.

A panoramic photo at the prefectural border of Tokyo, Saitama, and Yamanashi. (2017/5/23)

However, this peak is not the summit. The highest point of Mt. Kumotori is the dozens of meters to the north. Here you will find a triangulation station and a mountaintop sign by Tokyo and Saitama prefectures. In 2017, a new sign was added to commemorate the year of altitude. 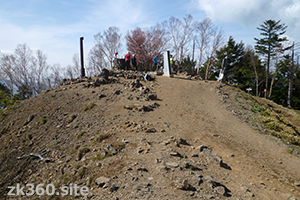 The following panoramic photo is the afternoon scenery taken at the summit of Mt. Kumotori. It was sunny, but Mt. Fuji was hidden in the clouds. However, I saw the mountains of Okuchichibu and the Southern Alps of Japan.

The next morning, I went to the summit again at sunrise. This time there were clouds on the east side and I couldn’t see the morning sun. However, I saw a dramatic Mt. Fuji wearing an umbrella cloud in the distance. 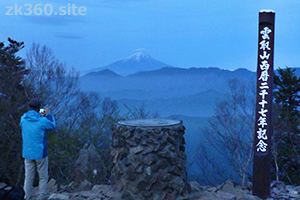 Mt. Fuji can be seen in the direction of this photo. Click the word “THETA” at the bottom left of the panoramic photo to open a wide screen and zoom in to find Mt. Fuji.

(1) It is an attractive long course from JR Okutama Station to Mt. Kumotori via Mt. Mutsuishi, Mt. Takanosu, and Mt. Nanatsuishi. However, most climbers stay overnight at Nanatsuishi hut on the way. The Okutama hut closed in March 2019, and now there is nothing there. Staying in a tent is also prohibited (as of September 2021).

(2) The shortest route is to take a bus from JR Okutama Station to Syonewdou (limestone cave) to Naka-Nippara (to Higashi-Nippara on Saturdays and Sundays). Then, walk along the Nippara forest road, climb Mt. Ko-kumotori, and reach Mt. Kumotori. Stay overnight at Kumotori Sanso hut and go down the mountain on your favorite course the next day. This course may be closed due to the collapse of the mountain trail, so check in advance.

(3) From JR Okutama Station, take a bus bound for Kamosawa-Nishi or Taba and get off at Kamosawa. From there, you can reach Mt. Kumotori via Mt. Nanatsuishi. An ordinary climber can reach the summit in a day. Stay overnight at Kumotori Sanso hut and go down the mountain on your favorite course the next day. When going by car, there is a parking lot for climbers up the forest road from the side of Kamo Shrine.

(4) Take the bus bound for Taba from JR Okutama Station and get off at the Omatsuri bus stop. Walk along the forest road for about 10km to Sanjo-no-Yu. Then, climb the Mizunashi ridge to Mt. Kumotori. If there are few buses to Taba, you can take the bus to Kamosawa-Nishi to the end and walk to the Omatsuri bus stop. The forest road is currently closed to private cars. Previously, climbers could drive to the end of the forest road, and this route allowed them to climb Mt. Kumotori on a day. But now, it’s difficult to make a day trip unless you have a good leg.

(5) The course from Mt. Mitsumine, which used to be the main route, to Mt. Kumotori is remaining. First, take a bus from Seibu-Chichibu Station on the Seibu Railway to Mitsumine Shrine. In the case of a car, you can use the second parking lot of Mitsumine Parking. From there, it takes about 10km to Mt. Kumotori and about 6 hours one way. The Mitsumine Ropeway was abolished in December 2007.

(6) It is also possible to climb Mt. Mutsuishi and Mt. Takanosu from the shore of Lake Okutama and walk Ishione to Mt. Kumotori. You can also climb the Inamura-iwa ridge from Nippara and walk along the Ishione from Mt. Takanosu. However, as of September 2021, the Inamura-iwa ridge is impassable due to the collapse of the mountain trail. Alternatively, you can climb the northern ridge of the Nippara Limestone Cave and walk along the border between Tokyo and Saitama to reach Mt. Kumotori. There is also a course from Tabayama Village in Yamanashi Prefecture to Mt. Kumotori via Mt. Hiryu.